Pain in thighs during pregnancy is one of the common discomfort that women have to deal with during this period. Like other pregnancy discomforts, thigh pain also resolves after the delivery of the child. Thigh pain causes as well as its management during pregnancy are explained in this article... 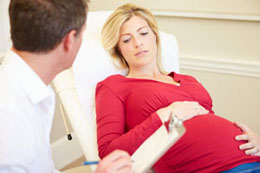 Pain in thighs during pregnancy is yet another pregnancy discomfort, from which a large number of women have to suffer during this period. Most of the discomfort associated with pregnancy, whether it is back pain, hip pain or thigh pain, are usually caused by hormonal changes that take place during pregnancy. During pregnancy, the level of certain hormones in the body rise considerably in order to prepare the body for childbirth. In addition to these, pregnancy is accompanied by a lot of structural changes. The cumulative effect of all these changes are the various pregnancy discomforts including thigh pain.

Causes of Pain in Thighs During Pregnancy

Women can experience thigh pain at any stage during pregnancy. Pain in thighs during early pregnancy, as well as later and at the time of birth can be mainly caused by a condition known as symphysis pubis dysfunction (SPD). This condition is caused by an increase in the width of the symphysis pubis or the pubic bone joint. The pubic joint is held in its place by some ligaments, and pregnancy can cause these ligaments to loosen. Basically, an increase in the level of the hormone 'relaxin' is responsible for causing the ligaments to soften and loosen, so as to facilitate the delivery of the child. If due to the influence of this hormone, the ligaments loosen in excess, it can cause the pubic bone joint to move and thus cause pain.

In other words, the pubic bone joint can lose its stability due to the effect of the hormone relaxin, which in turn can produce pain in the inner and middle thigh, groin, lower abdomen and the pubis area. Another condition that can cause inner thigh pain during pregnancy is 'sciatica' or sciatic neuralgia. It is caused by the compression of the sciatic nerve, which runs from the lower back or the base of the spinal cord down the legs. It is the largest nerve in the human body, responsible for providing sensory functions to the lower extremities of the body. During pregnancy, the growing uterus can put pressure on this nerve, due to which one can feel pain in the inner thigh region, buttock and the lower back. The pain caused by sciatica can also radiate to the legs.

Symptoms of Pain in Thighs During Pregnancy:

Apart from the pain, some other common symptoms are, a burning sensation and numbness in the affected area. Sometimes, a woman can also hear a clicking or popping sound while moving the legs or changing her position, if symphysis pubis dysfunction is responsible for causing thigh pain. She may experience discomfort in opening or lifting the legs, and while walking or standing. Women suffering from sciatica usually experience a shooting or burning pain in the buttock, lower back and the leg, along with the inner thigh region. Pain associated with sciatica is often felt in one side of the body. Along with pain, one can feel numbness, and tingling sensation in the affected area.

Dealing with Pain During Pregnancy

Pain in thighs during pregnancy can be managed or alleviated with a few simple methods, after ascertaining the underlying causes. If SPD is found to be the cause of thigh pain, then one can get some relief from crutches and support devices like pelvic support belt. After evaluating the condition, physicians can also recommend physical therapy and the appropriate pain medications. Though SPD cannot be prevented, pregnant women can strengthen their muscles and the ligaments of the pelvic region with the help of a few exercises. One can start doing pregnancy exercises, recommended by their physicians in the early stages of pregnancy. However, women should never start an exercise program during pregnancy without the consent of their physician. Thigh pain caused by sciatica can be managed with the application of heat, or cold compress on the affected area. Changing the position or lying on the side opposite of the pain too can relieve the pressure on the sciatic nerve and alleviate the pain.

Non-steroidal anti-inflammatory drugs can be taken for sciatica pain relief. However, pregnant women should take medications only after consulting their physician. They should avoid lifting heavy objects or standing for a prolonged time period, in order to prevent the aggravation of the pain in thighs during pregnancy. If the thigh pain worsens in spite of taking all possible precautions, then it is better to get the condition medically evaluated with the help of a physician.
You Might Also Like
What your eye color reveals about your health
Highly Effective Health Supplements For Women
The DXA Bone Mineral Density Scan.
Your Belly Fat Could Lead to Heart Disease
Use Herbal Calcium Pills To Improve Bone And Joint Health
Low Back Pain Explained

Fibromyalgia vs. CFS, differences in symptoms, causes, and treatment

Training A Puppy Not To Dig - Come On, Have Mercy On Your Flowerbeds Heal Fractured Bones In 2 Weeks Using Natural Solutions A Guide To Thanksgiving Turkey Serving Size Thawing And Roasting Slots Of Fun That Won’t Break The Bank Senior shingles patients unlikely to have recurrence of painful skin condition Rheumatoid arthritis tied to mood disorder symptoms, cognitive impairment Ewelry- The Perfect Gift To Women Hip and Knee Orthopedic Surgical Robots:Market Shares, Strategies, And Forecasts 2016 to 2022