Have you been experiencing pain in ribs while coughing? It's possible that your ribs may have developed cracks due to severe coughing. Scroll down to find out why one may develop bruised ribs from coughing. 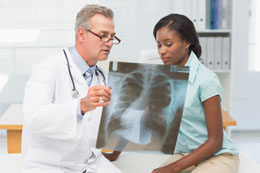 The human skeletal system comprises several bones that give shape to the human body. The rib cage, which is also known as the thoracic cage, is a bony framework that provides protection to the organs located in the thoracic cavity. Besides the twelve pairs of curved bones called ribs, other components of the rib cage include an elongated T-shaped bone called sternum, twelve thoracic vertebrae, intercostal muscles and costal cartilages that connect the ribs to sternum. Though blunt chest trauma is the most common cause of cracked or bruised ribs, at times, ribs may get bruised due to violent coughing. Here's some information on how our ribs move during the act of breathing and why one may develop bruised ribs from coughing.

As you already know, the rib cage is a bony and cartilaginous structure that encloses the chest cavity. It acts as a protective covering for the blood vessels as well as the vital organs present in the chest cavity. In order to understand how ribs may get bruised from coughing, one must understand the movement of ribs during the act of breathing. The act of breathing concurs with the expansion and contraction of the thorax. The act of inhaling and exhaling air is also associated with the movement of diaphragm, which is a sheet of muscle that separates the chest cavity and the abdominal cavity. Besides the diaphragm, groups of muscles located in the spaces between the ribs, also help in moving the rib cage up and down. It is the expansion and contraction of the thorax that changes the pressure within the lungs. The movement of the ribs during the act of breathing, is likened to the 'bucket handle' type of motion. This motion helps the lungs to inflate or deflate. During inhalation, the movement of the external intercostal muscles and the diaphragm causes the enlargement of the chest cavity. This helps in drawing air into the lungs. During exhalation, the diaphragm and the internal intercostal muscles relax. This reduces the space in the chest cavity. This causes the lungs to contract which in turn causes the air to be forced upwards.

Can the Ribs Get Bruised from Coughing?

Now that you know how the ribs aid in the process of breathing, let me tell you the impact of coughing on breathing. Under normal circumstances, breathing is an involuntary action, that is almost effortless. However, one may suffer from painful or labored breathing due to repetitive strain to ribs due to chest congestion. When the body tries to expel the inhaled irritants by way of cough, the ribs may suffer from trauma due to the repetitive or spasmodic contraction of the chest cavity. The violent release of air or phlegm during coughing fits can even cause the ribs to crack. Persistent bouts of violent coughing over a prolonged period of time could be caused due to bronchitis, pneumonia, pleurisy, whooping cough or other respiratory infections. Those who have fragile or brittle bones are at a higher risk of getting a bruised or a cracked rib from coughing. This is the reason why people suffering from degenerative bone disorders such as osteoarthritis, osteoporosis or other forms of arthritis are more susceptible to developing bruised ribs due to coughing. Bruised or cracked ribs can cause labored and painful breathing. One may also experience severe pain while bending or moving the torso.

How to Treat Bruised Ribs?

Bruised ribs are usually caused due to rib injuries, but if one is suffering from severe rib pain from coughing, doctors would take a look at the chest X-ray to ensure that the bouts of persistent coughing have not affected the ribs. Doctors generally recommend the use of painkillers or anti-inflammatory drugs in order to provide pain relief. Steroids may be prescribed if the pain is very severe. Application of heat pads or ice packs may also help in alleviating the symptoms caused by pulled intercostal muscles or inflamed costal cartilage. It is extremely important to take rest and let the ribs heal. One must refrain from any activity that may exacerbate the symptoms. Since violent coughing can cause the ribs to crack, it is extremely essential to treat the underlying cause of violent coughing. A variety of viral or bacterial infections can lead to violent coughing. It is therefore, essential to run certain tests to ascertain the underlying condition. If the cough is dry, one may benefit by using cough suppressants. If the patient is suffering from a productive cough, then one can use an expectorant or other home remedies that may help in coughing out phlegm. Since coughing could be caused due to irritation of airways due to exposure to environmental pollutants, one must avoid contact with allergens or irritants.

Since frequent episodes of violent coughing can cause the ribs to develop cracks or get bruised, one must make sure that the cough is resolved at the earliest. Drug therapy or self-care measures must be used so as to prevent cough from worsening to such an extent. Since painful breathing or rib pain while coughing could be indicative of bruised or cracked ribs, don't ignore these symptoms. If you ever suffer from these symptoms, the wise thing to do would be to get a medical checkup done immediately.
You Might Also Like
Rib Pain During Pregnancy
Sharp Pain Under Right Rib Cage
Pressure Under Right Rib Cage
Bruised Ribs from Coughing
Left Abdominal Pain Under Ribs
Bruised Ribs: Symptoms and Treatment