Joint pains are common in adults, but nowadays even children are suffering from this dreaded symptom at a very early age. This article covers various causes of this problem in children. 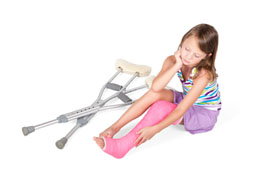 Joint paint occurs in the area between the bones, which is connected by a joint. It is caused if any ligaments, bursae, or tendons surrounding the joints are injured. An adult may suffer from joint pain due to aging, but nothing can be more serious than sudden joint pain occurrence in children, since unlike in case of adults, their joints are yet to wear and tear. Sometimes, children may suffer from what is called acute reactive arthritis, which is quite severe, but gradually decreases in a few weeks or months. This may happen mainly due to a viral or bacterial infection. But children who suffer from this type of arthritis may suffer for months, even years, because doctors often fail to diagnose the problem.

Causes of Joint Pain in Children

Juvenile Rheumatoid Arthritis
Juvenile rheumatoid arthritis is the most common cause of this problem. Every year, approximately, one child in every thousand children is affected by this type of arthritis. It mostly affects children below sixteen years of age.

Symptoms
Its symptoms include swollen and painful joints, stiffness in the joints, limited range of motion, and uneven arm or leg growth. Thankfully, most of these cases are not severe. However, there have been cases where some children have had severe arthritis that could not be treated.

Treatment
Non-steroidal anti-inflammatory drugs (NSAIDs) are mostly recommended medication for juvenile rheumatoid arthritis. But there several side effects of this medicine such as nausea, vomiting, anemia, etc. The doctor may also conduct therapy sessions which may include exercises suitable for this type of arthritis.

Bone Infections
Osteomyelitis or bone infection, may occur in both children and adults. If not treated at the earliest, bone infection can lead to permanent bone deformity. Bones are usually not susceptible to infections, but they can become infected in a number of ways. It is often caused by bacteria or microorganisms which enter the bloodstream through an injury such as an open fracture.

Symptoms
Redness, swelling, and pain in the joints are some of the symptoms of bone infections. If a part of the body is infected, it can carry the bacteria to the bones in other body parts. It is quite common in children since they are prone to cuts and bruises while playing.

Lyme Disease
Another cause is lyme disease. It is caused by the bite of a tick, a small parasitic arachnid called Ixodus Scapulari that is usually attached to the body for several hours before transmitting the bacteria responsible for lyme disease.

Symptoms
All tick bites result in lyme disease. Joint pain resulting from lyme disease usually occurs later, when the early symptoms have already showed up. But not every victim shows all the early symptoms like fever, headaches, tiredness, stiff neck, chills, muscle pain, etc., and may directly have joint pain. If left untreated, lyme disease may adversely affect the heart and the nervous system in children.

Treatment
Antibiotics like cefuroxime, amoxicillin, and doxycyline are some of the medicines that are used for treatment of lyme disease. Apart from these, penicillin and erythromycin are also recommended.

Osteochondrosis
Osteochondrosis is described as a group of diseases characterized by tissue death followed by regrowth. It can occur in different parts of the body and has been categorized as articular, non-articular, and physeal.

Symptoms
People with osteochondrosis may have symptoms like inability to move along with severe pain in the affected area and decrease in muscle mass.

Treatment
If the case is not too severe, medicines like Acetaminophen are recommended. Moderate amounts of NSAIDs are also advised which will help in reducing the pain. Surgery might be required in case of a severe problem.

Celiac Disease
It is a gastrointestinal disease that damages the large intestine and makes the absorption of nutrients more difficult. This results in joint pain. Patients with celiac disease cannot tolerate gluten, a protein found in wheat, rye, and barley and also found in everyday products such as medicines and lip balms.

Symptoms
Besides joint pain, the symptoms of celiac disease are diarrhea, skin rashes, foul-smelling stool, etc. Sometimes the symptoms are similar to those of other diseases, so you may not realize that you have contracted celiac disease.

Treatment
Actually there are no such specific treatments for celiac disease. The remedial measure is to avoid foods containing gluten.

Fractures and Avulsions
A major cause of joint pain is trauma or injury. In simple language, broken bones are called fractures. It may be caused due to overuse of the bone or bone infection. Bone infection or osteomyelitis is often a common reason for a child suffering from bone fracture.

Symptoms
Symptoms of bone fracture can be, inability to move the injured limb and appearance of bruises in the injured area. Broken bones can sometimes lead to bleeding and swelling in the affected area.

Treatment
Plaster of paris casts and splints are the most common methods suggested for a fractured bone. Other treatments include closed reduction, traction, internal and external fixation, etc.

Rheumatic Fever
Rheumatic fever occurs in children when they are infected with the streptococcus bacteria and the symptoms appear after about one to five weeks of the infection. If it goes untreated, it may spread to other parts of the body such as the heart. If it so happens, then the child will start exhibiting symptoms like shortness of breath, tiredness, chest pain, swollen joints, and fever.

Symptoms
Joint inflammation, including swelling, tenderness, and redness of multiple joints are the symptoms of rheumatic fever and are mostly found in children aged five to fifteen years. The symptoms appear about one to five weeks after the infection.

Treatment
Depending on the severity of the disease, the doctor may prescribe antibiotics and anti-inflammatory medicines. But in severe conditions, an operation to repair damaged heart valves might be required.

Hemophilia
It is a rare hereditary bleeding disorder where blood does not clot. There are two types of hemophilia: type A and type B. Type A hemophilia is more common than type B. With hemophilia, clotting does not occur in the injured blood vessels and as a result, the wounds take a longer time to heal. With time, hemophilia can lead to arthritis in your child along with chronic pain and decreased function of the bones.

Symptoms
If your child is suffering from hemophilia, he may bleed anywhere especially in the joints, muscles, and in the digestive tract. Severe conditions of the diseases can lead to continuous and copious amounts of bleeding.

Treatment
Cryoprecipitate, which is made from freeze-dried concentrate of human plasma, is the most effective treatment for hemophilia. Preventive medication like prophylaxis is used for patients with moderate to severe hemophilia.

Bone Tumor
Bone tumor is a rare case but, nevertheless, one of the causes of joint pain. It may also lead to bone cancer. Bone tumors may be malignant i.e., cancerous or non malignant i.e., non cancerous. If the bone tumor is malignant, then it can spread to other parts of the body. In case the tumor occurs in the area of the joint, the patient may suffer from dull and achy joint pain. The child may wake up quite often in the night. If the tumor breaks, it can cause severe pain accompanied by fever.

Symptoms
Even a slight injury can lead to bone fracture, which is one of the symptoms of bone tumor. Other symptoms are swelling in the joints and severe pain in the bones, which becomes worse at night. Non malignant tumors may not show any symptoms.

Treatment
Benign tumors may not require treatment at all since most of them do not spread to other parts of the body. But for malignant ones, early diagnosis and chemotherapy sessions can prove helpful.

Clinical assistance is recommended, since you cannot depend on home remedies to cure joint pain your child is suffering from. Your physician will study the case history of the child to determine the origin of the pain as to whether it has originated in the muscles or the tendons. This will help him suggest a suitable treatment and medication.
You Might Also Like
What Can You Do About Joint and Muscle Pain?
Knee Joint Pain Relief
Herbal Pain Relief Oil To Get Rid Of Joint And Muscle Pain
Herbal And Natural Oil For Joint Pain Relief
How To Control Joint Pain And Simple Tips To Cure
Bursitis - An Unimaginable Joint Pain