Oblique fracture is the form of fracture where the bone breakage occurs diagonal to the axis of the bone. Read on to know more about it. 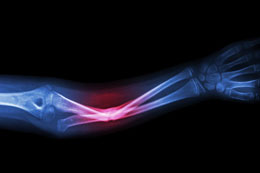 Bones make the framework of the body. They help in maintaining the posture and also facilitate the movements. Bones are the living tissues in the body which consists of cells that produce hard crystalline compounds. Mostly, these compounds are mineral salts or the compounds of calcium phosphate. Calcium phosphate is responsible for the strength and firmness of the bones. Bone density goes on increasing from puberty, until age 30, where it is maximum. However, thereafter, it goes on decreasing. In older age, bones become porous and lose their density, leading to various bone disorders and injuries. Fractures are most common form of bone injuries. There are different types of bone fractures depending upon the extent and occurrence of the injury.

What is an Oblique Fracture
Although, bones are the hardest part in the body, they cannot withstand higher forces and impacts. Bone fractures are pretty common among young children and older people. Accidents, falls, collisions also result in bone fractures. Fractures basically mean cracking or breaking of the bone in the body. This may be due to impacts, twisting at odd angles or trapping of certain body part. Oblique fracture is said to have occurred when the crack is diagonal to the axis of the bone. When the bones maintain their alignment post fracture, it results in non-displaced oblique fracture, when they don't, displaced oblique fracture occurs.

Causes
Oblique fracture mostly occurs due to trapping of one bone, while the other bone twists over it. The example is when the foot is trapped in something and the leg twists over it. This type of fracture is pretty rare, and mostly long bones of the body are most susceptible to this kind of fracture. Most oblique fractures occur at humerus (bone of the upper arm), femur (thigh bone) or tibia and fibula of the lower leg. Since, these are the strongest bones in the body, the impact causing their breakage has to be equally powerful. Older people may be the prime victims of oblique fractures due to the fragility of their bones.

Treatment
Before initiating any bone bruise treatment, it is important to evaluate the damage to ligaments. If the damage is small enough and incapable of impeding the movement of the affected part in future, then a normal plaster or cast may be sufficient to unite the broken fragments of the bone. However, if the damage is extensive, then a reconstructive surgery is first performed. Then, the bone is fixed in place with either a cast or metal rods and screws.

The recovery period for oblique fracture depends upon the extent of the injury and damage to ligaments. It is important to take care of the fractured part even after recovery.

Disclaimer: The information presented above is for educational purpose only and not for self-diagnosis/ treatment. We do not encourage its usage as an alternative for medical practitioner's advice.
You Might Also Like
Louis Vuitton4
The Maintenance Methods Of The Mbt Shoes
Fibula Fracture Treatment
Bone Fracture And Its Therapy Though Orthopedic
Natural Solutions For Bone Fractures Healing Using Natural Solutions-testimonial By Joyce Skudris
Heal Spinal Fracture In 2 Weeks Using Natural Solutions

How to Treat a Fractured Sternum