The following article deals with some examples of rheumatoid arthritis dietary supplements that you can make use of to keep your condition under control. Read to know more. 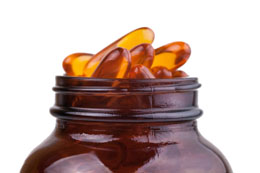 Rheumatoid arthritis is a condition in which the joints of the body are attacked by the immune system. This will result in the swelling and stiffness of these joints followed by inflammation. There will be apparent redness and aches all over, and therefore, the movement of the person will be strained and painful. Rheumatoid arthritis might also lead to destruction of the bones, cartilage, and ligaments, thus affecting the joints further.

There is no permanent cure for this condition, but it has been seen that a change in the diet can help reduce the pain and further prevent an onset of a painful attack. In the following article, we will look into some of the supplements that can be used to keep this condition under check.

Thunder God Vine
Thunder god vine (Tripterygium wilfordii) is a medicinal plant that has been used in Chinese medicine for many centuries now. The extracts from certain parts of the plant are used very frequently in an arthritis diet. It has been found that the extracts of this plant when used by a person suffering from rheumatoid arthritis, help to fight the inflammation that is caused. Along with that, it suppresses the immune system from fighting back and causing havoc in the body. If taken in the correct dosage it can also help in combating several symptoms that are caused by rheumatoid arthritis and reduce the pain.

Note - You have to be careful that you do not take a very high dosage of the same and do not continue it for a long period of time since it could lead to severe side effects. Always consult a physician before starting out on this herb.

Fish Oil
Fish oil is one of the richest sources of omega 3 fatty acids. This substance is essential to achieve an overall boost to the system. It helps to reduce the inflammation that is caused by rheumatoid arthritis. Along with that, it also helps in reducing the other symptoms that are brought on by this condition, like pain and swelling. It has been seen that it helps in relieving tender joints and morning stiffness as well. Herring, mackerel, salmon, and tuna are some of the fish that are high in omega 3. Also, fish oil supplements are available as capsules or oils as well. The other sources include flaxseed oil and canola and primrose oils.

GLA (Gamma-linolenic Acid)
These acids are a rich source of the omega 6 fatty acids and can be traced back to plants like black currant, primrose, and borage which are its richest sources. Omega 6 helps to form certain properties in the body that can act as reducers of inflammation.

Turmeric
Turmeric (Curcuma longa) is a very popular ingredient that is used in Asian countries for its multipurpose functions. It has been seen that turmeric has anti-inflammatory properties that help to reduce the pain and discomfort that comes about as a natural result of arthritis. An arthritis diet that contains turmeric has not only shown to reduce inflammation and certain other properties, but has also shown to improve one's immunity and therefore, prevent the onset of an attack.

Others
Some other dietary supplements for rheumatoid arthritis that have been known to work are―ginseng, green tea, certain varieties of boswellia, ginger, and soy products.

These products will ensure that you keep the arthritis at bay and lead a pain-free life.
You Might Also Like
Tips On Reducing The Symptoms Of Arthritis
Breathe Free Again! - Your Allergies wont be the same again
The Rewards Of Fish Oil: Less Arthritis, and Heart Problems
Are There Any Cures For Arthritis Joint Disease?
How Bad is Arthritis Knee Pain?
Symptoms And Types Of Arthritic Information

Arthritis Causes, Symptoms And Herbal Treatment That Work
Organic Derivatives Restore Periodontal Health
Simple Guide On How To Fight Arthritis
Steps For Taking Control Of Your Arthritis
What herbal remedies can I use for my arthritis?
Suggestions For Coping With The Arthritis Monster!

3 Fun Hobbies You Can Still Do with Arthritis

Learn How To Manage Your Arthritis Symptoms

How To Fight Your Arthritis And Win

Are You Tired of Arthritis Pain? Try These 3 Arthritis Pain Relief Tips and Drastically Improve Your Joint Mobility Digital Photography Success Stories Signs Of Aging And What You Can Do About Them Arthritis Pain Relief - Learn to Cure Arthritis Pain Naturally Info on Picture Frame Kits Ayurvedic Medicines For Arthritis, Stiff And Painful Joints How to Deal With Osteo arthritis - So Some Easy Diet plan Changes Could Help Me? Natural Gout Remedies Or Gout Medications - Whats Your Choice?